And next: the bus from Chinatown, Philadelphia, dead things, and so on.

So then there was Monday. Where, after six years of wanting to go here, I got on a bus at 6am to Philadelphia for the day, to visit the infamous Mutter Museum, a home for medical specimens and oddities from all walks of life.

The trip there was an excellent series of smooth and timely procedures. I procured a ticket on the internet for a dodgy bus from Chinatown, so decided getting there early would be advisable. Showed up at 5.56am, felt very clever, and was directed to the bus in question, thinking I had an hour and four minutes, so no problem. Well, the bus was full and actually took off four minutes later, I inadvertently had taken the 7am bus. The guy who took my ticket didn't bother to tell me, and i have to say, in this case, I didn't particularly care. En route back, I arrived 40 minutes early to find out my bus had been cancelled. Stranded in Pennsylvania! I thought, ever dramatically. Then i coerced the woman behind the counter to give me my money back ( "I'm Canadian, I can't possibly wait for the next bus, I will be lost in New York upon my return!"), and walked about 20 feet to another dodgy bus company. Asked for a ticket to NY, and they threw me right on a bus that left not four minutes later.

This strange citizen I discovered (and became suitably concerned by) on my walk across town to the museum site: 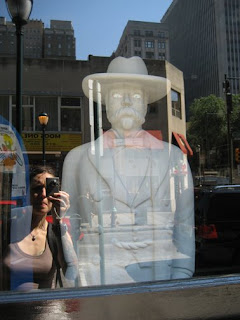 This sign upon my arrival, signalling the terminus of my long-awaited pilgrimage: 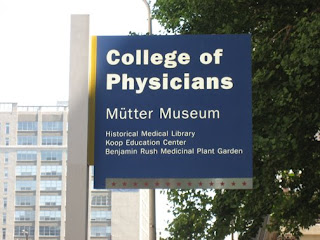 And then the museum.
It was SO cool. I am working on a little side project called "The Ailments" which involves a great deal of drawings of dead things, and was thrilled and grateful to be able to garner permission in advance to photograph the specimens there for reference material. Among the most fascinating things was a wall of skulls, consisting of mostly thieves, gypsys, sailors, and suicides, some with explanations of their grisly exits from the world (Timothy Castriotis; Corfu, Greece, Supercargo (?), died of a dagger thrust in Scutari) I of course now want to do a book of skulls, surmising the lives of these people whose (now empty) heads leer out at Pennsylvania's tourists.
Just like this fact that the Oxford English Dictionary was written predominantly by a madman, I'm fascinated that we are using the skulls and organs of thieves and gypsies to educate ourselves on the workings of our own bodies. Note how it's never a Bay Street (or Wall Street, in this case) investment banker that has anything to tell us about ourselves, or not anything lasting, anyhow. When you die, the money moves onwards, changes hands, becomes irrelevant to the person it was owned by.

Also interesting was a talk I had with one of the museum staff, who told me that despite the fact that the specimens are all dead, they are still incarnate, inasmuch as they are capable of disintegration if not taken care of/preserved properly. That is, it is the things surrounding them that determine whether they are alive or dead, so to speak.
He pointed out that formaldehyde wasn't always used to preserve specimens, for ages it was alcohol. In fact, a soldier from the (a) civil war (so said he) had to have his leg amputated and wanted to keep it, so stuck it in a barrel of whisky and put it on a cargo ship (ship? something like that) to send it home. The sailors didn't realize, and cracked open the barrel to drink from it. No joke.
Posted by stef lenk at 11:54 PM