It was on Sunday morning, fresh after the Bikes on Bloor ride, that stef lenk, unsuspecting and spring-sodden, ran into Tino et al in the vicinity of the Queens Park rally.
After proceeding down to Kensington Market to imbibe some exemplary Limeade in honor of Pedestrian Sundays, the latter invited the former on one of their urban exploration missions, a building scheduled for demolition and, indeed, half way there.

Upon arrival, miz lenk eagerly clambered through said building, or what was left of it, taking a great many photos and marvelling at the architecture of the place, soon to be replaced by more spit and drywall and then sold off as "luxury condo living". It was, however, during a momentary confrontation with one of the dormant crane shovels stationed outdoors that stef was nearly consumed herself, literally, by an unwieldy pair of steel jaws. The subject is unscathed from the incident, but thanks Tino for recording it and sending her a copy of the photo, if only for insurance purposes, should she have lost a limb or four. 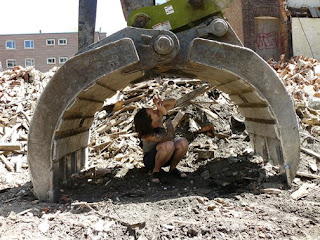