I am a part of one.
One of the petters, in fact.
All i know is there are special gloves and coloured beads involved.
Tomorrow night, at the Theatre Centre, doors are at 6.30pm.
What a life!
Posted by stef lenk at 10:46 PM No comments:

what i'm doing INSTEAD of writing my opus.

Writing a BLOODY OAC grant application. 5.5 hours! To rehash the same grant application that, let's be frank, has already been used/proven unsuccessful.
And though I do know it's pretty much all a crap shoot, activities like this are certainly no way to heighten one's self-esteem. Sigh.
Why was it I decided against an accounting job again?
Posted by stef lenk at 10:44 PM No comments:

sundry news and things that make me excited.

I've been sitting alone at this computer for TOO long. But what follows are the fruits of my labours:
I've re-designed my website. Yes, again. I'm still fine-tuning, re-loading all the bits, but check it out.
Also put up at last a link to etsy.com, so interested parties can sally forth and purchase my books online. Very Clever.
And last but not least, in shameless opposition to my usual anti-advertising mandates, I'm pasting in a link to this site here. 'Coz the Christmas fever is already kicking in, and we all need some serious help from those like the people below. Clickety click and check it out.

discovered the other day on a small piece of paper sitting on a trunk in my home.

Charles Bukowski's epitaph: DON'T TRY.
Posted by stef lenk at 7:00 AM No comments:

About a new mimic for embryonic stem cells
The discovery, while clever and fascinating, didn't do anything for my secret disdain for the male-dominated medical industry, which I'm occasionally convinced (in my darkest moments) is just looking for a way to render the female gender unnecessary.
And I quote:
...the process used by the two teams avoids the obstacles that have halted embryonic stem cell research through embryonic cloning. For example, it doesn't require a supply of unfertilized human eggs, which are destroyed in the cloning process, leading to ethical, religious and political opposition.
Posted by stef lenk at 6:55 AM No comments:

the news according to me.

A quick scan of the news headlines this morning, yielded this little gem. GIANT SCORPION!! ALIVE!! REAL!! THOUSANDS OF YEARS AGO!! What happened, that's the question. And are they all really gone... 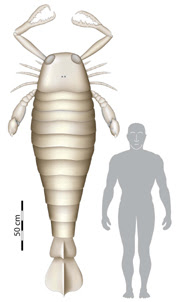 Yet another reason why Facebook continues to fatigue me.

Read this. (thank you James Binnie.)
Posted by stef lenk at 10:31 AM No comments:

Victoria Park and Kingston Rd. to Howard Park and Roncesvalles.
Saturday night.
It's true.
Posted by stef lenk at 12:16 AM No comments:

one thing that makes me laugh and laugh and LAUGH.

AND EVEN BETTER:
Here is a link from the above page to a "heated debate" about the topic at hand, and of course the usual previous related statistics are being examined for precedent.
My favourite: In 1997 one Robert Watt, 38, was fined £100 for trying to have sex with a shoe in an Edinburgh street. Glee!
Posted by stef lenk at 1:59 PM No comments:

She's Awesome. That's a Guarantee. And I'll be there too. And (let's face it) I'm Awesome. Not as awesome as Stacey May's first novel launching, but I do my best. 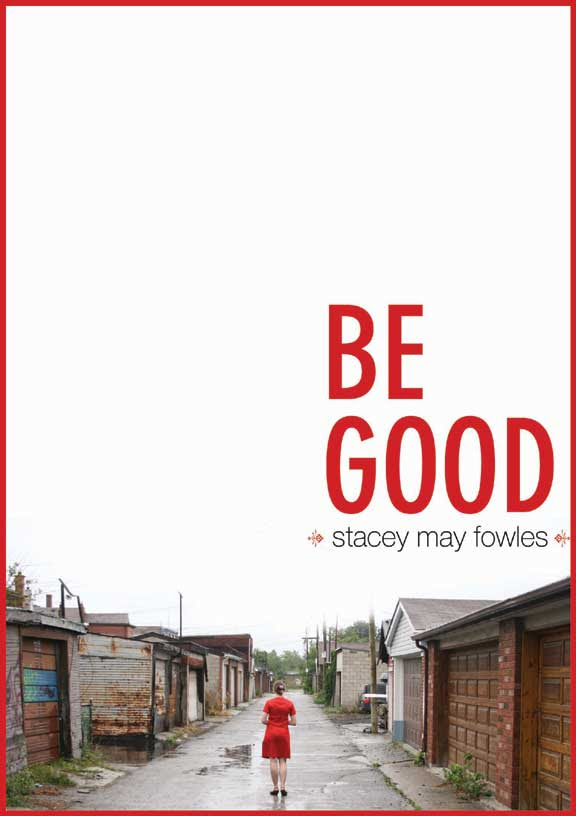 There will be lots of food, drinks, live music, a DJ, door prizes and so much more. Come Out!
Posted by stef lenk at 11:37 PM No comments:

Only this morning did i discover that there have been comments on this blog that have as of yet gone unheeded!
One of which was JP's observation that, in my gratuitous bumshot posting, I neglected to post a picture of his bum in astonishing trousers I made him however many years ago.
This is an important point. The ability to get JP to wear any colour other than black is an accomplishment not to be taken lightly. And although I once had a posting of such pictures on blog#1, those links have long since become defunct.
If my trousers are doomed to disappear into oblivion, they must be allowed one more nostalgic venture into boastydom.
SO.
Herewith, a few more gratuitous bum shots of my friends.
In my pants.
(so to speak).
From my past.
May they now rest in peace.
(The pants that is, not my friends.) 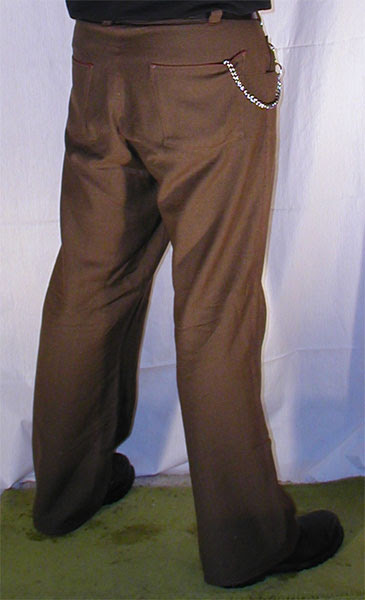 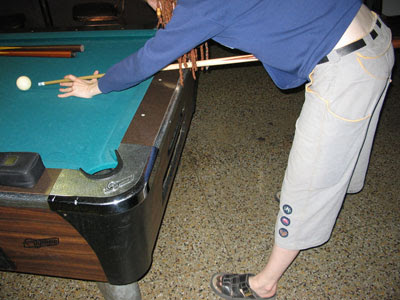 Willow and pants. Struggling with pirate accoutrements in BC. Date also unknown. 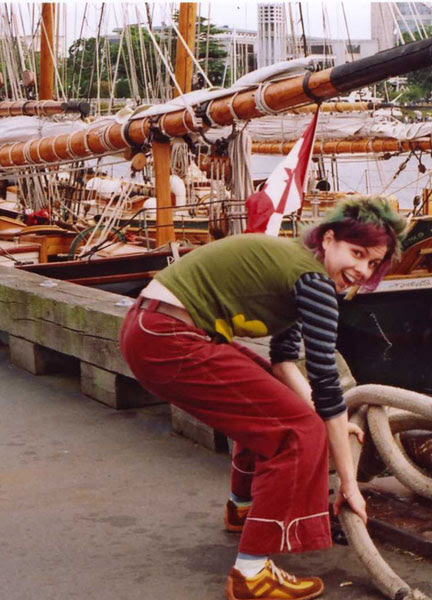 These are photos of the antique shop that existed until a month ago beneath my apartment. 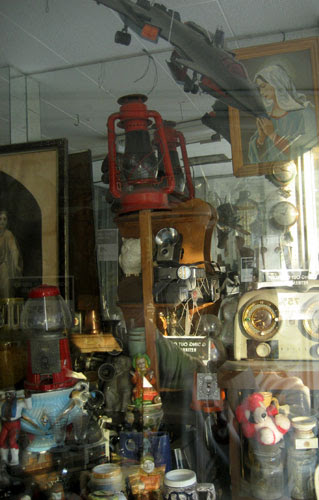 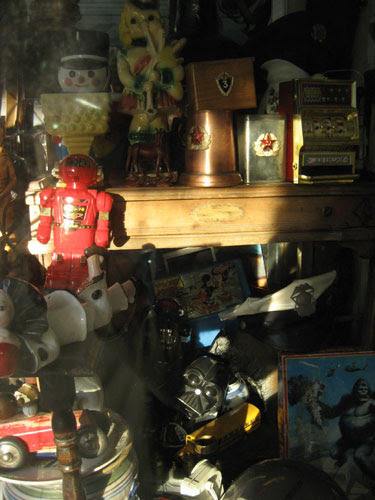 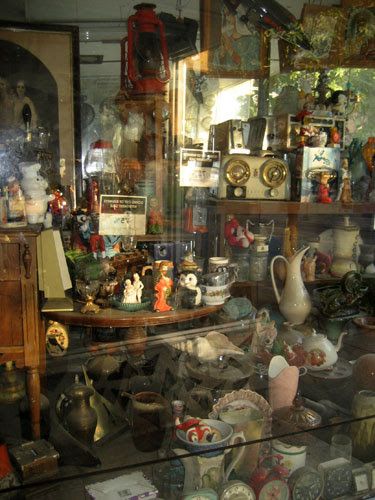 It would be a lie to say that this proprietor didn't drive me NUTS by piling antiques and junk obstructing my front door on an almost daily basis.
However, there were Treasures. There is No Question about this.
He was the first one forced out of his space upon the sale of the building, given a months notice to vacate after twenty years in business. The new building owner is looking to, and I quote:"...get another art gallery or book store in there, something that the current clientele of the area would appreciate...(as I have) an obligation to the street and the community" (Parkdale Liberty, October issue)

I woke up at 6.30am this morning (for some godForsaken reason), resignedly made a cup of tea and settled myself in my bay window with a book to wait for Saturday morning to introduce itself to me at a more dignified hour.

At 8am, I looked out to see the proprietor of the now vacant antique shop ride up on his bicycle.
The entire street was still deserted.
He wandered back and forth between his old shop window and the other antique shop windows for about ten minutes, by himself, before getting back on his bicycle and cycling away.

This is what he would have seen of his old shopfront; the one the owner was so eager to have him vacate.
What our new building owner's "revitalisation of Parkdale" now looks like, as of 8.46am this morning: 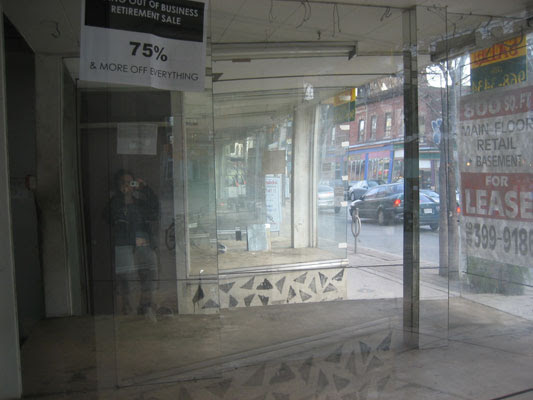 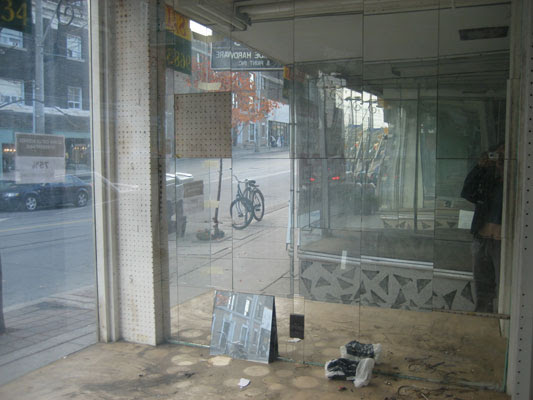 found today, in the Annex. 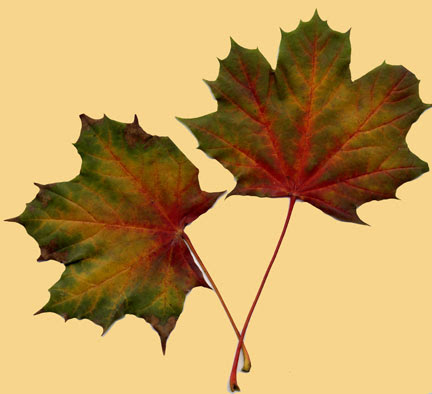 Who says the internet isn't useful?

This link found whilst searching for reference photos of Soho Square.
Posted by stef lenk at 12:30 PM No comments: 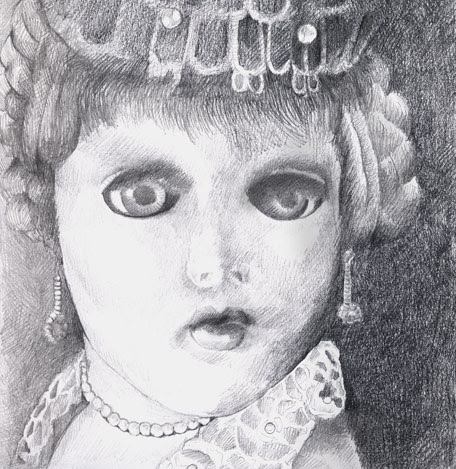 and the next issue doth cometh... 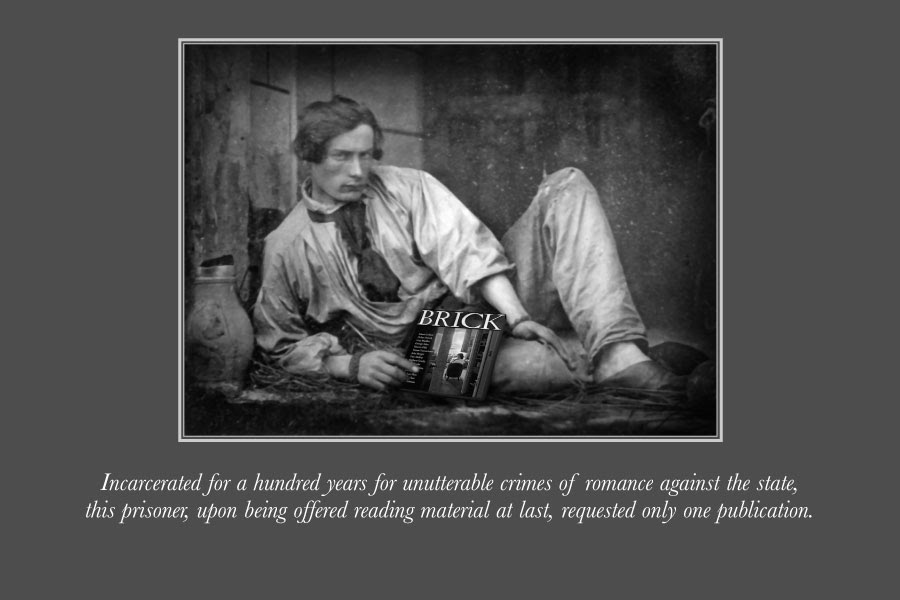 and this from Louise Bourgeois...

"I did everything I could every day of my life".

upon an anxiety-fraught moment and the nature of "useful".

What use would George Orwell have been to anyone had he done naught but work in a soup kitchen all his life?
Posted by stef lenk at 10:31 PM No comments:

I realize at this moment that I do run the risk of being one of those blogs that posts eccentric rubbish with which, let's face it, the internet is already swamped.
But, dear reader(s), if they can do it, so can i.
I TOO CAN POLLUTE THE LITERARY CYBER-STREAM.
And especially with this morning's discovery, found upon googling briefcases.

And WHY, praytell, was I googling briefcases?
'Coz that's just the kind of new job i seem to have. 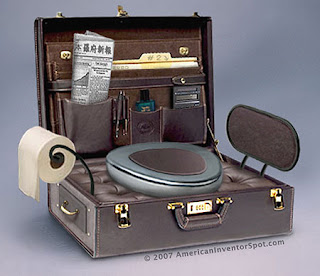 (pause)
Goddammit, I've even going to include the blurb. It's too much.

Carry the Gotta-Go briefcase with you at all times, and you’ll never be caught short. Simply open up to reveal every modern convenience that a public toilet lacks – a clean comfortable seat, freely flowing toilet paper that hasn’t run out and isn’t all over the floor, and reading material of your choice.

As to the practical side of carrying your toilet with you, worry not – the inventors have thought it through. There is a stainless steel bowl with a sealing lid to keep any potentially hazardous fumes from escaping, and the briefcase has ample space for holding the documents, pens and other equipment you might need on your travels, alongside your waste.
Posted by stef lenk at 5:51 AM No comments:

It might have been when the horse was brought in that I realized I should no longer have been in bed.
People, tonnes of 'em, one cooking bacon, i think still in the wrapper,while I tried to make news cels in my living room and keep everyone quiet at the same time.
Then someone brought in a dog, then a horse, then i opened my eyes,looked at my clock, 3.20bloody6AM.

By the tiny balls of christ.

Hopped into pants and onto my bike.

After exiting the building.

Police car with unsettling high beams through my alleyway as i veered out; compassionate sorts due to the fact that they didn't chase me down for veering across the street on a red. Bless them.

King and Lansdowne: One man slumped back in a car seat and surrounded by police cars, black and white, lights flashing. Dead as a stump, no doubt. (You heard it here first. Ha. Who says I'm not up on the news?)

King and Bathurst: no lights on today at the Travellodge motel. All criminal activity therefore ceased for the evening. (Likely with the death of the man at King and Lansdowne.)

As well as one security guard abandoning desk inside in favour of well lit newspaper box and cell phone; Likely texting boyfriend to inform him she is going to the airport this afternoon after work, heading somewhere distant and exotic for good. He can sell all her jewelry if he so desires, she never liked it anyhow.
Posted by stef lenk at 3:56 AM No comments:

showdown by the elevator.

It was 9.06am.
Yesterday morning.
With the mailbot.
Straight on.

I decided there was nothing for it but to stand my ground, and see what happened.
AND THE BLOODY THING NEARLY MOWED ME DOWN.
It didn't stop.
I had to leap out of the way at the last moment.

I was informed later that my Nemesis follows an invisible line drawn on the carpetting through the hallways.
And cares NOT A WHIT for obstacles, human or otherwise.
Well done, Dalek Sek, your species lives on in the cyber mail machines at the cee.bee.cee.

Imagine the headlines, i thought wryly.
CASUAL EMPLOYEE FOUND DEAD BENEATH MAILMOBILE
News at 6.
6 in the morning, that is.
Posted by stef lenk at 4:18 AM No comments: