Usually, me and stuff don't like each other much.
Unless it's books, I find Stuff superfluous, weighty, not unduly joy-giving, and being responsible for it kind of annoying.
THAT IS, of course, unless we are talking about the Stuff of Shannon Gerard. 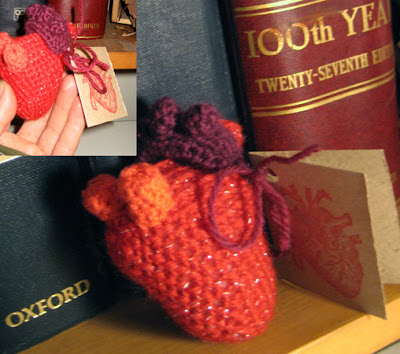 Ladies and gentlemen, The Stuff Of Shannon Gerard. A small little piece of Heart-y loveliness to carry around with you in the darker months of the year.
Posted by stef lenk at 11:49 PM No comments:

the problem of stereotypes.

I was given a Dr. Who yearbook by a fellow appreciator today, and I was THRILLED.
Like, Stupid Thrilled.
Discussing this addiction, which has gotten worse of late, we agreed that if i were male, it would be assumed, given the fervor of my dedication, that I am a chronic masturbator who lives in my mother's basement, plays atari, and never showers.

I would like to say for the record that I showered this morning and haven't played atari in years.

And I have breasts.
Posted by stef lenk at 5:55 PM No comments:

A bit too modern.

Went into the office today, plugged the kettle in for tea, went back to my computer, grabbed the mouse, and started looking for the place to click to get the water boiling.

If i watch many more Doctor Who reruns, not only will i need medical attention myself, but I will run out of Tom Baker episodes, on top of all the new seasons, which have already been exhausted (unless there is a season 4, which i don't know of, from beneath this existential rock of mine.)
This could all be a grave problem.
Posted by stef lenk at 11:12 PM 3 comments:

After 4 hours of PULLINGMYHAIROUT over book drawings, I decided it is One Of Those Days and I would turn my attentions instead to finishing off a drawing for Brick that was happily straightforward, if not a little boring.
So I give you Colette. 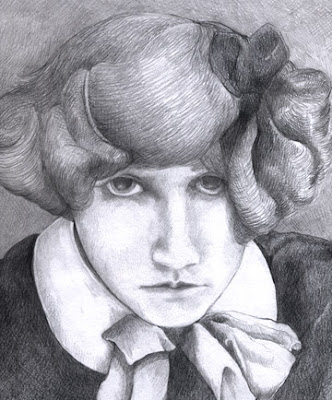 to blog or not to blog.

Am BACK.
I tend to vacillate between "Blogging? BALLS to that" and "Blogging? Why not, lunch is over and the kettle has yet to boil for tea".
So.

Went to Paris, went to Angouleme.
The latter went SWIMMINGLY.
Made back all my costs from the festival proper, and sold more books than at MoCCA NY and TCAF COMBINED. Most importantly though, people seemed SO interested. So much discussion, so many questions, so much engaging, my head must have grown three to five times bigger than it already is.
With my abominable french grammar, it's a wonder I didn't come back married, murdered, or contracted into questionable activity involving the mafia. But I seem to have made it okay, and hopefully have not misrepresented my project in attempting to blunder my way through french explanations.

Now, of course, it's draw, draw, DRAW, as TeaTime will be launching in June, along with an accompanying interview/article about the project (unless something horrid and unforeseen happens) in Rue Morgue magazine. WOOOO.

And somehow to get through the February blues.
And...well, that's all really...
Posted by stef lenk at 2:50 PM No comments: