So, for anyone who has had to deal with me over the past three weeks or so, i've been a Royal Mess, particularly more so this time around with this booklet, which i feel much more pride over than the last two. Probably 'coz i've solved alot of drawing issues (some perspective, also using watercolours for the first time, etc etc)
But, as is my wont, knowing that I had a few days leeway to get this book to the printer, had me revisiting problem pages repeatedly, at risk to personal health and sanity, and for NO apparent public reason.

That is, I am well acquainted with a few people who know no bounds in their neuroses for perfection, myself included, and it is remarkable how frequently that perfectionism is invisible to a normal human eye. Seeing the self-imposed torture other people put themselves through, you would think i would know better, but, of course i don't.

And moments like this make that line even blurrier.

This (the BEFORE shot) was one of my last drawings, that i did AT LEAST four times, to no avail. 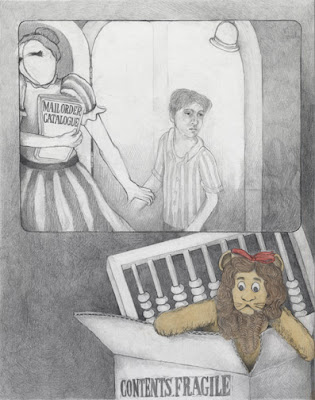 It's the top panel i was concerned with. It's kind of a big moment in the book, the Faceless Lady has just arrived, ominously of course, bringing the Boy with her, and he notices the Cowardly Lion and is coaxed away from her towards it. But, as is obvious, i couldn't get it. All i was getting was some weird snot-faced drawing of a weird looking kid looking over his shoulder.

Then. ONE final attempt the night before getting the book to print. Exhausted, I decided to abandon all reference photos, quality paper, and literally make it all up (something i do NOT traditionally do well) And this is what i came up with. 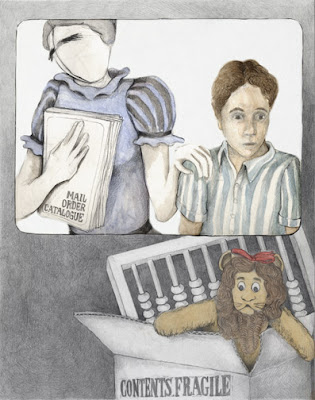 Probably, to normal humans, not much different, on the "successful drawing" richter scale.
But to me, honestly, it was Worth it. That is the difficult part. It really was worth it. If only to me.

It's funny though, the mood of them both is significantly different. There are moments when i wonder if the original one was a better one to go with, for my own selfish reasons. Then i feel like the second was a kinder, more honest alternative.
The above, of course, will make no sense to anyone but me.